MPB Umwelt was originally produced for an exhibition in British Columbia, Canada where it responded to an artwork that sat outside of the gallery, a welded steel pyramid, painted sky blue, by artist Bridge Beardslee. Although this 1970s pyramid dealt with strategies of the time, mysticism and minimalist art production, Knowles has updated the pyramidal form with materials that have been transformed as a result of climate change brought on by industrial production – denim pine.

Denim pine is wood that has been affected by the mountain pine beetle (MPB), the blue staining of the wood is created by a fungus that the beetles inject under the bark to paralyze the tree’s natural defense system (sap) in order to lay their larva. This allows the larvae to mature and feed on the tree. The fungus also inhibits the tree’s ability to take up water and nutrients, which in turn starves it to death. This natural blue stain is the color is of the tree’s death brought on by human caused conditions implemented to support industrialization rather than health of the forest.

The Mountain Pine Beetle is said to original in the mountain ranges of Mexico and has a migratory pattern that now reaches the mountains of northern Canada. With the climate temperatures rising, deep freezes necessary to stem the beetles’ northward spread no longer occur and natural forest fires are disallowed by forestry businesses, resulting in beetle populations that have taken advantage and adapted of this new environment. This has led to population rise and the feeding habits of the beetles to move into overdrive, they now take out all pines no matter the health of the tree. 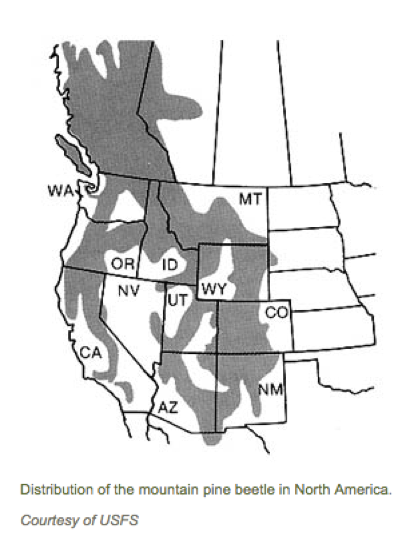 Umwelt is a German term that translates into home or environment. These environments are specific to each species: humans, animals, insects, etc. In blending the pine that was once the home of the Mountain Pine Beetle with the building structure seen on each panel of the pyramid – modern roof truss system designs used for pitched roof homes – both human and insect environments come together.

This wood was felled and milled in Northern Canada, shipped to central cities throughout the western provinces of Canada and has now migrated back south towards the beetles’ original territory.